CBSE 2020 exams: HRD minister says “students to take their board exams in their own schools”

NTA clears exact timing details of JEE Main and NEET UG, Admit Cards Will be out 15 Days before the Exams 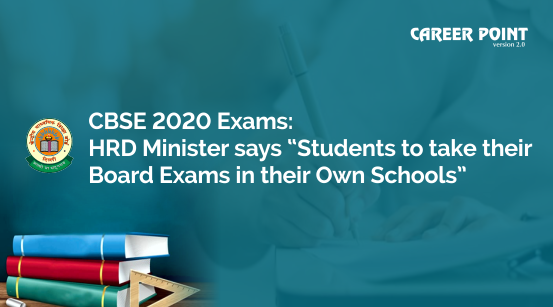 Union HRD Minister Dr Ramesh Pokhriyal Nishank tweeted today that the CBSE has allowed its students to take their exams at their own schools. Previously only 3000 exam centers were marked but now the exams will take place at around 150000 test centers.

Academic director of Career Point, Mr Shailendra Maheshwari said that there was an excerpt from a video in this tweet. The video is of an exclusive interview of Mr Pokhriyal, given to a news channel “Republic”.  When he was asked what sort of initiatives are being taken by the ministry to take care of the students and ensure their safety?

Then he said that- “it’s right that the exam dates and the complete schedule of the board examinations has been released. On the other hand, the exam dates of competitive exams like NEET UG 2020, JEE Main and Advanced 2020 have also been declared. earlier to this the students as well as their parents were concerned about the uncertainty of the exams. fearing that the exams may get announced suddenly. but now when the proper exam schedules have been announced it has put an end to all the uncertainty.”

Mr Pokhriyal also said that “for competitive examinations, we have formed a task force under the guidance of UGC, and the UGC will ensure all the recommended norms like how to maintain social distancing, managing transportation, or time management. Similarly in case of school education, we have instructed NCERT to develop a task force to arrange when and where the students will come at the exam centers. Additionally the students who will be appearing for the board examinations will take their examinations in their own schools and they will not require to go anywhere else for their exams.”